All of Stilton was shocked and saddened by the sudden and unexpected death of Olive Main on Tuesday 26th November 2019.

A ‘mover & shaker’ of so many projects and amenities that we might now easily take for granted, but which owe their success to her vision, commitment and ability to marshal the skills and energies of others. The following is compiled from many people’s reminiscences.

Perhaps her most important contribution to village life was being for over 30 years a member and Chairman of Stilton Parish Council, leading it through many major developments and challenges. These included:

The considerable esteem in which Council held her was shown vividly on her retirement by the presentation of the Freedom of Stilton on 24th June 2018. Few of us get to read our own eulogies and how much better it is to show such appreciation during the person’s life.

Olive was a committed and caring Governor of Stilton School for over 20 years. In that time, she worked with six head teachers and countless teaching and support staff. She took a leading role in safeguarding children, and was a kind and supportive confidant to many staff, in good times and bad. Formidable and honest in her appraisal of situations, whenever there was a job to be done she was always one of the first to step forward. The school will remember her with great affection.

When I became Rector in 1983 there were no activities for children; it was going to be one of our first priorities. But Olive was one step ahead of me! I remember her soon informing me that she, along with one or two others, were ready and willing to launch what eventually became Sunday Adventurers. This became a thriving part of church life, at one stage using three classrooms at the school on Sundays.

Olive even took a grandmotherly interest in this new Rector, who was expecting the birth of his daughter, Amy. At the time, the Rectory had only one bedroom with a radiator in it. Olive badgered the Diocese to put this right, ready for the new arrival!

Olive’s passion for the common good made an immediate impression on our current vicar, Revd Richard Gibbs, serving on our church council, a member of a number of church groups and a keen supporter of the Night Shelter project. He found her always very good company, and if he wanted the ‘unexpurgated version’ then Olive was the person to go to. Her irreplaceable historical knowledge has been a key contribution to the current Church Heritage Project.

A dedicated lobbyist for Stilton

Olive represented Stilton on the Yaxley Road Safety Committee, the Norman Cross Action Group (relating to the impact of the Greater Haddon housing development), the Norman Cross Eagle Committee, the Friends of Norman Cross and the Alms Houses Trustees. She lobbied vigorously about retaining bus services to the village. She was also a long-serving member of the Cambridgeshire Police Authority, playing a role in the appointment of two Chief Police Officers.

Olive was a founder member of Stilton & District Twinning Association, taking part in the first exploratory visit to St Christol les Alès in 1996. She is a signatory on the Twinning Charter between our two village councils and twinning associations. Over 23 years she missed only two of the planned exchange visits to St Christol and always represented Stilton at their formal dinners. For years she provided questions at their fund-raising Quiz Nights.

Few of us depart this life without leaving some things unfinished, but Olive lived long enough to see her vision of the new Pavilion become reality, to be present at the dedication of the new war memorial, and even to see SCAN’s first colour cover!

And of course we cannot forget her creation of Stilton Community Association, born at a time when the then Parish Council wasn’t in a position to promote community activities. Cheese-Rolling flourished for many years under her leadership and SCAN has gone from strength to strength for over 400 monthly issues.

The picture above, taken at her receiving the Freedom of Stilton, is particularly appropriate; both she and the celebratory cake had ‘Stilton’ written all over them.

An extraordinary lady indeed, and one whom no one individual is ever likely to replace in the life of our community.

This is our general forum for news and public discussions 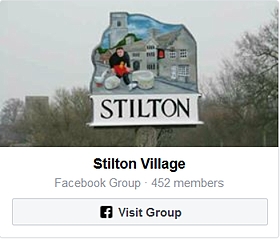