About the Playing Field

After many years without secure use of a permanent sports field, in 2005 Stilton Parish Council purchased the freehold of the current field at the southern end of the village. Since then, a continuing programme of development has been progressively creating an excellent long-term asset for the whole community. An outstandingly sucessful village project has now created a modern multi-purpose sports pavilion on the site. Opened early in 2017, it provides excellent facilities for indoor and outdoor sports and other activities. More about Stilton Pavilion.

Rules of the Playing Field

By Order of Stilton Parish Council

April 2009 saw the official opening on the site of an All-Wheeled Facility – aka a skate park! This project was an outstanding example of what can be achieved by an enthusiastic and hard-working group of young people supported by adult advisors. Together, they raised funding and project managed the entire exercise. The project has even been visited by other community groups seeking to follow Stilton Sk8z’ example.

District Councillor Peter Mitchell, who had played a key role in the project, said:

Ian Parmenter and myself were in attendance – mainly to carry off the injured! But we were not needed; the only job that I did was to hand out the awards. But the real winners are the residents of Stilton: this event was organised and run by the youths themselves. Well done Stilton Sk8z.

After three years of dedication and hard work – and despite the disruption caused by Covid – Stilton Play Park was officially opened on 10th October 2021.

Another example of our community coming together to create first-class leisure facilities for future generations.

We owe a huge debt to all who made it happen, especially Parish Councillors Keith Bull and Dee Darnell, a great many volunteers and fund-raisers, and County Councillor Simon Bywater who helped secure funding from the Cambridgeshire Community Fund. But the best thanks comes from the happy faces of our under-12s! 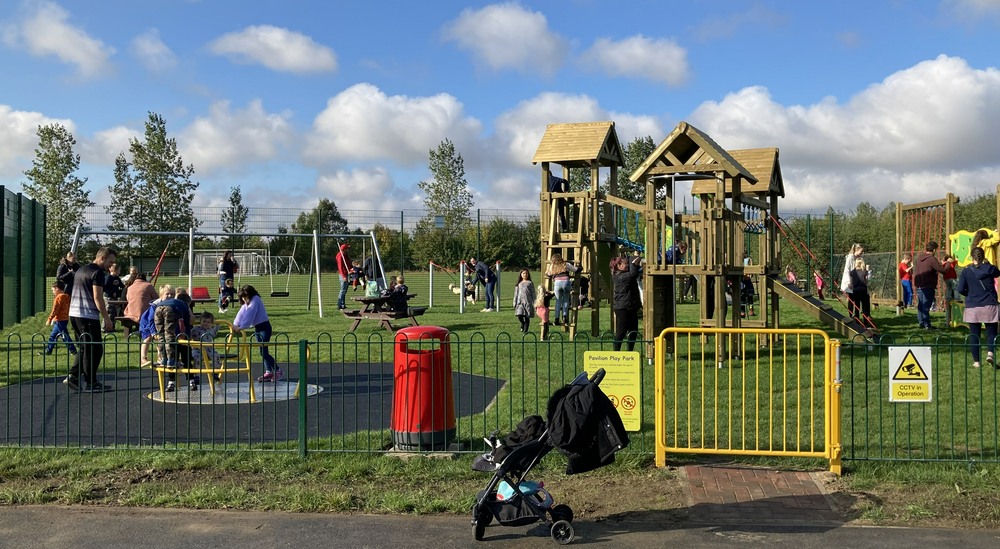